Abstract – As humans, Internet of Things, software services and AI continue to become the entangled fabric of distributed systems, systems engineers and researchers are facing novel challenges. In this talk, we analyze the role of AI in context of IoT, Edge, and Cloud in the co-evolution of distributed systems for the new decade. We identify challenges and
discuss a roadmap that these new distributed systems have to address in order to bring intelligence to the edge. We take a closer look at how a cyber-physical fabric will be complemented by AI operationalization to enable seamless end-to-end distributed systems. 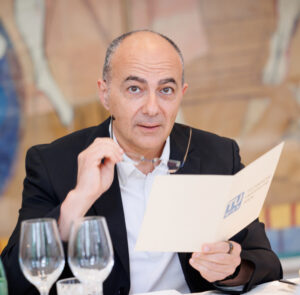 Technical University, heading the Research Division of Distributed Systems at the TU Wien, Austria. He holds several honorary positions:
University of California (USC) Los Angeles; Monash University in Melbourne, Shanghai University, Macquarie University in Sydney, University Pompeu Fabra, Barcelona, Spain. From Dec 2016 until Jan 2017 he was a Visiting Professor at the University of Sevilla, Spain and from January until June 2017 he was a Visiting Professor at UC Berkeley, USA. From 1999 – 2007 he worked as the co-founder and chief scientist of Caramba Labs Software AG in Vienna (acquired by ProjectNetWorld AG), a venture capital co-funded software company focused on software for collaborative processes in teams. He is co-founder of edorer.com (an EdTech company based in the US) and co-founder and chief scientist of Sinoaus.net, a Nanjing, China based R&D organization focusing on IoT and Edge Intelligence.
He is founding co-Editor-in-Chief of ACM Transactions on Internet of Things (ACM TIoT) as well as Editor-in-Chief of Computing (Springer). He is an Associate Editor of IEEE Transactions on Services Computing, IEEE Transactions on Cloud Computing, ACM Computing Surveys, ACM Transactions on the Web, and ACM Transactions on Internet Technology, as well as on the editorial board of IEEE Internet Computing and IEEE Computer.
Dustdar is recipient of multiple awards: IEEE TCSVC Outstanding Leadership Award (2018), IEEE TCSC Award for Excellence in Scalable Computing (2019), ACM Distinguished Scientist (2009), ACM Distinguished Speaker (2021), IBM Faculty Award (2012). He is an elected member of the Academia Europaea: The Academy of Europe, as well as an IEEE Fellow (2016) and an Asia-Pacific Artificial Intelligence Association (AAIA) Fellow (2021) and the AAIA president (2021).

University of California at Berkeley

Title: Trading off Consistency and Availability in Distributed Cyber-Physical Systems

Abstract – Cyber-physical systems (CPSs) are often safety-critical systems, where malfunctions imply risk to humans. As CPSs increasingly involve several componentsinteracting over networks, it becomes imperative to devise strategies that preserve safety in the face of network disruptions, whether caused by malicious intent or malfunctions. The classic “CAP Theorem,” due to Eric Brewer, states that in the face of network partitions (P), a system must give up either consistency (C) or availability (A). We have recently generalized and quantified this theorem. The generalization, called the “CAL Theorem,” gives a numerical relationship between network latency (L), consistency (C), and availability (A). The relationship takes the form of an elegant system of linear equations in a max-plus algebra. The CAL theorem shows that as network latency varies, for example when the network comes under attack, then either consistency or availability or both must also vary. I will show in this talk that a CPS must prioritize either availability or consistency and that which to prioritize depends very much on the application. I will show how the recently developed Lingua Franca coordination language enables designs that enforce these application-specific priorities and that gracefully handle fault conditions.

Biography – Edward A. Lee is Professor of the Graduate School and Distinguished Professor Emeritus in Electrical Engineering and Computer Sciences (EECS) at

the University of California at Berkeley, where he has been on the faculty since 1986. He is the author of seven books, some with several editions, including two for a general audience, and hundreds of papers and technical reports. Lee has delivered more than 200 keynotes
and other invited talks at venues worldwide and has graduated 40 PhD students. Professor Lee’s research group studies cyber-physical systems, which integrate physical dynamics
with software and networks. His focus is on the use of deterministic models as a central part of the engineering toolkit for such systems. He is the director of iCyPhy, the Berkeley Industrial Cyber-Physical Systems Research Center. From 2005-2008, he served as Chair of the EE Division and then Chair of the EECS Department at UC Berkeley. He has led the development of several influential open-source software packages, notably Ptolemy and Lingua Franca. He received his BS degree in 1979 from Yale University, with a double major in Computer Science and Engineering and Applied Science, an SM degree in EECS from MIT in 1981, and a Ph.D. in EECS from UC Berkeley in 1986. From 1979 to 1982 he was a member of technical staff at Bell Labs in Holmdel, New Jersey, in the Advanced Data Communications Laboratory. He is a co-founder of BDTI, Inc., where he is currently a Senior Technical Advisor, and has consulted for a number of other companies. He is a Fellow of the IEEE, was an NSF Presidential Young Investigator, won the 1997 Frederick Emmons Terman Award for Engineering Education, received the 2016 Outstanding Technical Achievement and Leadership Award from the IEEE Technical Committee on Real-Time Systems (TCRTS), the 2018 Berkeley Citation, the 2019 IEEE Technical Committee on Cyber-Physical Systems (TCCPS) Technical Achievement Award, the 2022 European Design and Automation Association (EDAA) Achievement Award, the 2022 ACM SIGBED Technical Achievement Award, and an Honorary Doctorate in Computer Science from the Technical University of Vienna.